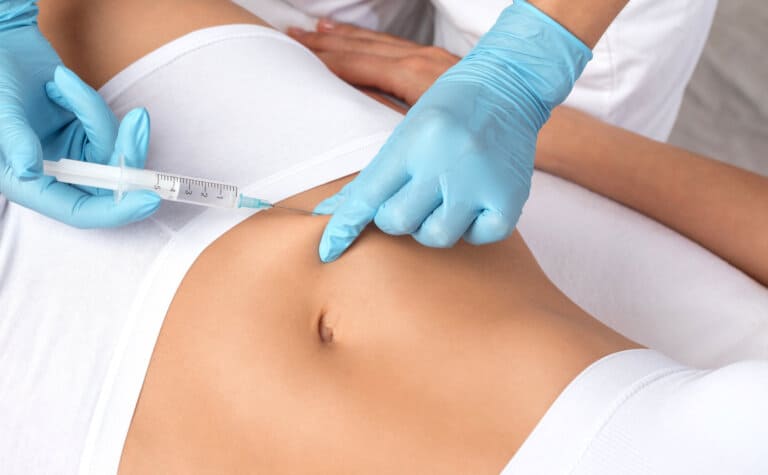 The strength with which Aqualyx’s popularity has grown is crazy considering that it didn’t exist as a treatment just 10 years ago. In fact, Realself, a review site for cosmetic procedures, shows that 57% of the 96 reviews felt Aqualyx was worthwhile.

Nevertheless, what it has gained in popularity, it may have lost in messaging and purpose. Now, many people may have heard of it but they don’t think it’s real or are unsure of how it works. This can create hesitancy and lead to misinformation.

Today, we’re going to be looking at what Aqualyx actually is, how it works and why it isn’t a fake miracle treatment for the ‘lazy’, but rather an important discovery in the aesthetic field that can help treat some very troublesome conditions.

How does Aqualyx work?

During an Aqualyx procedure, dissolving injections are used on stubborn pockets of fat that have otherwise been resistant to diet and exercise. A special needle called a cannula will be used to administer a series of injections. The procedure takes about an hour in total but this can also vary on the individual and size of the target area. You will often see this procedure used for addressing double chins or unwanted love handles.

Following the compound is injected into the target area, it will attach itself to the fat cells and dissolve them. The fat then naturally leaves the body over the coming weeks by passing through the kidneys. The compound being emulated in the injection is actually a synthetic version of a naturally occurring acid in the body, which also destroys fat cells.

The acid in question is Deoxycholic Acid, a substance that you can find in the stomach and is terrific at breaking down the fat in your diet. Whilst Aqualyx isn’t exactly using Deoxycholic Acid, it is a very close synthetic copy and stimulates the body’s own fat-fighting mechanism but targeted due to the site of injection.

It can take anywhere between two and eight Aqualyx treatments in total to meet your goals. However, your progress and target area will, of course, be monitored by the practitioner and the treatment adjusted if need be.

Aqualyx is a non-surgical procedure which means there will be no scarring, or anything equivalent after your session is completed. And, as an added bonus, the post-procedure downtime period is minimal. This is the big appeal of Aqualyx; there is no need to take weeks off for recovery or endure uncomfortable surgical procedures when a few painless Aqualyx sessions will do an even better job.

Who is the Aqualyx treatment for?

In terms of age, Aqualyx is suitable for those between the ages of 18 and 60 but this will need to be determined after a clear and considered consultation with a qualified medical professional. You should NOT undergo Aqualyx treatment if you are pregnant or breastfeeding.

There are some who will argue that Aqualyx is a convenient treatment option for lazy and gluttonous people but this is a skewing of the facts. There are conditions, such as double chins or sagging knee fat, that are simply not possible to exercise away sometimes. With Aqualyx, you can give yourself a chance to beat a seemingly unmovable obstacle.

Aqualyx isn’t purporting to be a procedure that can bring someone down from their current weight to their ideal weight. Therefore, Aqualyx is not recommended for people who want to lose excessive weight. Aqualyx is about fixing unfixable body dysmorphia and, in some cases, getting that last pesky piece of fat that just refuses to budge.

Again, Aqualyx is not a treatment for general weight loss or obesity, it is for healthy people who have stubborn pockets of fat they want gone. The main areas you will usually see Aqualyx used on are:

The answer is YES! Whilst every single cosmetic/aesthetic procedure cannot guarantee success because of differences in each individual, Aqualyx has been medically researched and clinically evidenced to show that the treatment is safe and approved.

But … this is where YOU come in! Aqualyx has done its job and zapped those pesky fat cells into dissolution, the baton will now be passed to you. If you don’t follow a healthy diet and keep up with regular exercise, the weight you just got rid of, won’t hesitate to come right back!

Do I have alternative options?

There are other fat dissolving treatments. One of these is a fat freezing treatment called Coolsculpting, which is also a very popular procedure. And another is LIPOcel, a body contouring and fat reduction procedure. However, over the last decade, Aqualyx has emerged as the absolute go-to treatment for fat dissolving – standing head and shoulders above the rest!

For more breakdowns, guides and insights into the world of aesthetics and cosmetics, keep an eye on Aesthetic Today!

Previous Article:
Gapped teeth? These are your best treatment options
Next Article:
The 10 Best Non-Surgical Cosmetic Treatments Trending in 2022